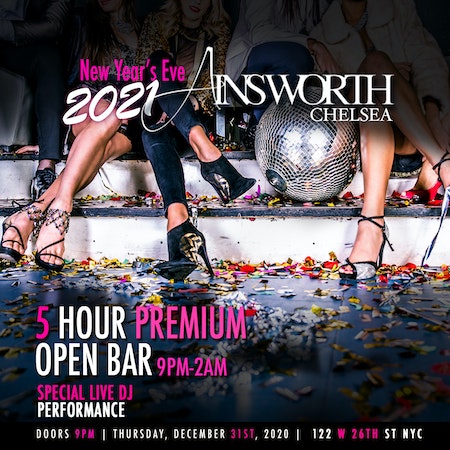 *All Tickets Are Subject to Price Increases

It’s New Year’s Eve, and Ainsworth Chelsea hosts an epic NYE party for New York City’s nightlife insiders. Located in the Gallery District of NYC’s trendy Chelsea, Ainsworth Chelsea is an upscale nightclub and celebrity hotspot that has ruled the NYC nightlife scene for years. This New Year’s, this upscale NYC venue is the place to be seen.

Ainsworth Chelsea is known as one of NYC’s flagship nightlife spots and it delivers a New Year’s event like no other. Party guests will delight in Ainsworth Chelsea’s 5 hour premium open bar and complimentary early evening passed hors d’oeuvres. All dressed up in your New Year’s best, you need to show off a bit—take a spin around the room as the live DJ spins the best Top 40, Dance and Hip Hop beats to keep the party moving. Just before midnight, participate in the DJ-led live countdown to the New Year along with a live streaming of the NYE festivities in Times Square. A complimentary champagne toast tops off the festivities. For the special guests looking for a little extra, we invite you to indulge in one of Ainsworth Chelsea’s VIP ticket Packages with access to Table and Bottle Service and private nightclub seating.

Head to Ainsworth Chelsea this New Year’s Eve for a vibrant party with a chic cosmopolitan edge. Where will you be at midnight on New York's most dazzling night of the year?

This event is a nightlife New Year's party. It is not intended to be a dining event. It is recommended that if you wish to have dinner that you do so prior to the event at a place of your choosing. Your admission ticket includes entry to the event, the open bar service and music performance. Complimentary services are at the discretion of the venue.

Meat: Pigs in a Blanket