This Event Has Already Occurred 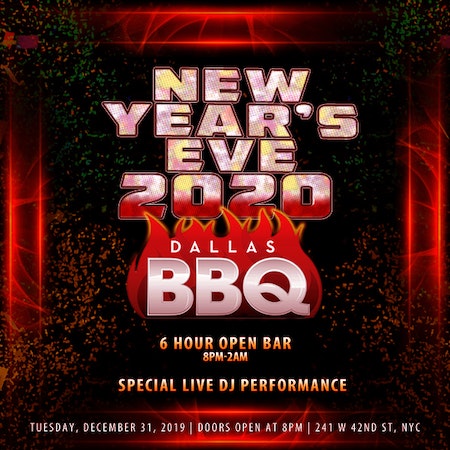 Price is PER PERSON and includes the following amenities:

Price is PER PERSON and includes the following amenities:

*All Tickets Are Subject to Price Increases

Your New Year’s Eve party just got heated up thanks to Dallas BBQ, New York City Times Square’s numero uno BBQ restaurant and venue space that is located steps from the much celebrated Ball Drop. This NYE, Dallas BBQ – a favorite in the NYC dining scene - is throwing the best NYE party that’s fantastic for grown-up partiers and great for families too.

For an ample helping of New Year’s Eve fun, head to Dallas BBQ, situated in the center of NYC’s famous Times Square Ball Drop. Guests over 21 can get in the holiday mood with a 6 hour open bar; those under 21 will have available 6 hours of unlimited non-alcoholic drinks like soda and juice. Whatever your age, everyone will be able to fill up on complimentary party amenities at this NYE spectacular with appetizing selections from the Dallas BBQ menu, served early in the evening. To turn the party-temperature up even higher, a live DJ will be playing the most crowd-pleasing hits of Top 40, Hip Hop, and House that’ll get party people young and old moving their hips to the beat. With this much revelry and plenty of available seating, Dallas BBQ is the place to be this NYE. You can also indulge in one of the VIP options such as Seated Main Room ticket, or the VIP Mezzanine ticket which offers an exclusive level that has its own buffet and bar. When the clock strikes midnight, join the DJ and the crowd in a spirited count down that’ll have over 21s raising their complimentary champagne toast to the roof and everyone saying a hearty howdy to the New Year.

NYC Times Square’s Dallas BBQ is a bi-level restaurant and venue that’s not only a NYC dining staple but also a go-to for friends, couples, and families seeking a fun night out in the heart of New York. Smack dab in the center of bustling Times Square, Dallas BBQ creates an inviting atmosphere with its pleasant and casual interior and a staff that simply embodies Texan hospitality. The enormous murals of water buffalos on the walls, the neon signs and lights, and the HD TV screens that are suspended throughout adds extra fun flavor to the restaurant, making Dallas BBQ a favorite fun-spot for any age.

For a sizzling New Year’s Eve, head to Dallas BBQ in Times Square, NYC for a party that is guaranteed to satisfy the party craving of merrymakers of any age.